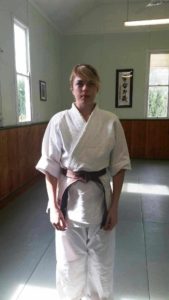 Tamara Burriss began Aikido training in May 2004 at the Kenshinryu Palmwoods Hombu dojo in the Junior Aikido Program and was a member of the teen B.U.G.G.s group. In 2007, she began the Adults class in Aikido and at the same time she became a student of Shinto Muso Ryu Jodo and Kenjutsu. In 2016 Tamara was made an official Kenshinryu Junior Aikido Assistant Instructor.