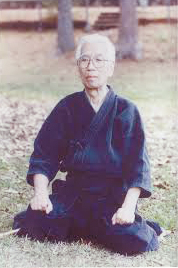 The Headmaster of the Kenshinryu , David Dangerfield Sensei, was a personal student of Master Nishioka Tsuneo Sensei. The Shinto Muso Ryu (SMR) lineage has been somewhat fractured since the time of the 24th Headmaster Shiraishii Hanjiro (1842–1927). His senior student and unofficial 25th Headmaster, Shimizu Takaji Sensei (1896–1978), travelled  up from Fukuoka to Tokyo to teach Shinto Muso Ryu with the Fukuoka Dojo remaining in the hands of his contemporary Otofuji Ichizo Sensei.  When Shimizu Sensei passed away he did not officially nominate a successor. Shimizu Sensei also changed the art considerably to accommodate its integration into the All Japan Zen Kendo Federation. Nishioka Sensei continued to teach the original SMR system in various locations in Tokyo and as technical director to the International Jodo Federation. Between 1999 and 2004 Nishioka Sensei travelled to the Sunshine Coast in Queensland on eight occasions  to disseminate his teachings to Australian students. Nishioka Sensei retired from active teaching in 2010. 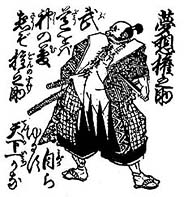 Records in the Bugei Ryuha Daijiten note that the Founder of Shinto Muso Ryu , Muso Gonnosukes’, original family name was Hirano and he was a descendant of Kiso Kanja No Taiyu Kakumei, a retainer of the famous general, Kiso Yoshinaka. Gonnosuke studied Tenshin Shoden Katori Shinto-ryu under Sakurai Ohsumi no kami Yoshikatsu and then Kashima Jikishinkage-ryu, mastering its famous method “Ichi no Tachi”.

If we can believe the legends … and there are more legends than facts … the only person to beat Miyamoto Musashi was a person as unusual as he was. He did this with a yon shakku (four foot) staff. In so doing Muso Gonnosuke gave birth to a martial arts system that would elevate the humble wooden staff to one of the pre-eminent weapons of the Bugei of Japan.

The first duel with Musashi occurred in Keicho 10 (1605) according to reports in the Kaijo Monogatari written in 1629. Gonnosuke lost the duel (perhaps defeated by Musashi’s famous Juji-Dome (two-sword ‘X’ block) technique.)

Following a long period of ascetic training at the Shinto shrine on top of Mount Homan in Kyushu, he is said to have been visited by the kami (ancestors, spirits) who told him “Using a round stick, know the suigetsu” (a vital point on the body). From this insight he developed a number of techniques for a four-foot staff known as a ‘tsue’ or Jo. The Jo could be used to sweep like a naginata, strike like a sword and thrust like a spear.

It is recorded that he had a second duel with Musashi inflicting Musashi’s only loss. Following this he became the senior martial arts instructor to the Kuroda clan and developed a complete system which he called Shinto Muso-ryu. This school remained an exclusive art (otome-waza) of the Kuroda samurai for many generations. It came to incorporate other weapons systems as those ryu became extant. Today the art includes Ittatsu-ryu Hojojutsu (arrest cord), Shinto-ryu Kenjutsu, Ikkaku-ryu Juttejutsu, Isshin-ryu kusarigama (chain and sickle) and Tanjojutsu.

The lineage remained intact through to Shimizu Takaji Sensei. Shimizu sensei was born in Meiji 29 (1897) and was certainly the ryu’s greatest exponent in the 20th century. Shimizu sensei was invited to leave Kyushu and introduce SMR Jo to Tokyo. Instrumental in this was Kano Jigoro, founder of Judo. In 1927 Shimizu sensei gave a demonstration for the National Police agency leading to the adoption of Jodo as a permanent aspect of Police training through to today. The Jo taught to the Police was slightly altered from the original form.

Shimizu Sensei was responsible for changing the name of the Ryu from Jojutsu to Jodo. There remain two main streams of Shinto Muso Ryu Jo. It is still practiced in Fukuoka prefecture, Kyushu while the art as practiced by Shimizu Sensei was preserved by Nishioka Tsuneo Sensei.  The Kenshinryu Chief Instructor, David Dangerfield, is one of a small number of people to have received the traditional certification of ‘Shomokuroku’ from Nishioka Sensei.