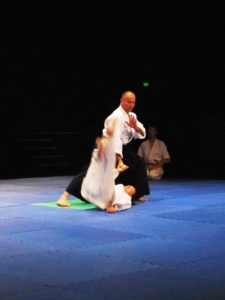 My first exposure to martial arts was doing some boxing at the tender age of 5 or 6.  I can still remember learning to “duck” with my head nearly scraping the floor – I guess I took ducking pretty seriously.  My Dad had been a boxer, having competed to help pay his way through University while studying medicine.  As a doctor he was often present at boxing meets (as the doctor on hand).  We had a speed ball in the shed – I used to stand on a platform he made up so I could reach it.  I remember my Dad occasionally grabbing the bag to make me miss and being cranky if I lost my balance.

Unfortunately circumstances were such that my next exposure to martial arts was not until about 18 years old, where I did a little Karate with a friend in his back yard.  He hard done some “hard” styles – Shotokan, Kyokushin – and I still recall the first session; when I thought we were finished, we had just completed the warm-up!  Tony had a wicked migeri (front-kick) and an overhand right that was very hard to stop – from this I learned a little about “contact”.

At around 29 years old I met a young guy who was running over Alexandra Headland in training for kick-boxing and who told us about a fight-night that was coming up.  I went along, and was shocked at the seeming brutality of it, but at the same time was amazed to find how quickly one becomes accustomed to it (as a member of the audience).  A few months later I found a training gym and within six weeks entered my first bout training under Roger Hilton of the Warriors Muay Thai gym.

I continued training and had another 4 fights training under Roger’s brother, Joe Hilton, with the Sunshine Coast Muay Thai Centre. Joe trains his fighters hard, and has produced a number of Australian title-holders, and at least one world-title holder. Many thanks to Joe for his training and dedication – as is usually the case in martial arts, the training fees you pay represent nowhere near the value you derive from the training and the input from your Instructors.

Muay Thai, particularly competing, taught me a few valuable things. It let me get a glimpse of understanding of “intent” – the guy in the other corner is really going to try and hit you, knee you and kick you, no holes barred (although still with the benefit of a referee and some rules).  This type of training takes you to a new level of fitness (mental and physical).

I had read and heard a little about Aikido over the years, and when a neighbour enrolled for an introductory course at the Palmwoods Dojo, I decided to join him (many thanks Brett-San).  From my first discussion with Sensei David Dangerfield I felt that the Aikido philosophy was congruent with my own, and that I could become great friends with this person.

Nearly 20 years on, the training has become more rather than less interesting, and there is more, rather than less, left to learn.  My approach is that one’s Aikido is about as good as one’s last two weeks’ training, hence there are not many training nights that I’m not on the mat.  I bring a strong emphasis on practical application into my training and my instruction, and endeavour to “keep it real” to the extent possible with different training partners.

For me underpinning Aikido is the notion of “Budo”.  In today’s society this notion is foreign for most, with such a strong emphasis on win/lose “competition” and all the distractions that take us away from the truly important “life/death” issues.

Once I was at the beach observing a school of bait-fish (just the name doesn’t give them a great head-start, does it?) being chased by larger fish.  Ducking, diving, darting in different directions – this was not a competition, this was live or die!  This is Budo.

From Musashi (a famous Japanese swordsman): “Do nothing which is of no importance”.

I consider it a privilege to serve as a Senior Instructor in the Kenshinryu.  I have a great regard for our Kancho (Headmaster), Sensei David Dangerfield – his teaching style and technical prowess, and his dedication to investigating/refining/improving the form.

Sensei David talked one evening a number of years back about “when does the technique start”.  Is it when you are throwing or locking your partner, is it when your partner starts their attack – or is it when you walk onto the mat?  For me, I try and have it start when I wake up in the morning.

I look forward to the opportunity to train with you.