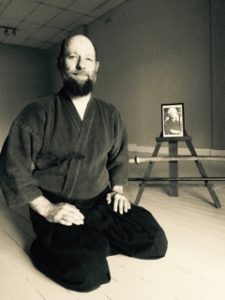 Jonathan was first introduced to the Budo Arts in 1994 by Zen Master Hogan Yamahata. This lead to the beginning of his Aikido practice by training at various Dojo’s with the different styles of Aikido.

In 1998, Jonathan moved to Armidale NSW, to complete his University studies. Here he continued his Aikido training with Chris Sensei of Aikikai Aikido. Two years later he become a student at Armidale Dojo with Martin Nagle Sensei, Jonathan started his practice in Yoshinkan Aikido, soon after he started attending Aikido training at the The Aikido Institute Hombu Dojo in Palmwoods Qld, under David Dangerfield Sensei.

In 2006, Jonathan was appointed to the Dojo administrator and instructor at the Armidale Dojo until 2012. He taught Adult & Junior Aikido classes, co-ordinated and taught Aiki Ability program/class and Self Defense workshops.