Kenshinryu Aikido derives from the Yoshinkan line of Shioda Gozo Sensei. The Headmaster, David Dangerfield Sensei studied this style first in Australia with Joe Thambu Sensei and then in Japan at the Yoshinkan Hombu Dojo in the mid 1990′s. The Kenshinryu style also owes a great deal to Dangerfield Sensei’s training in the kobudo of Shinto Muso Ryu under the master Nishioka Tsuneo Sensei by whom he was awarded the traditional certification of Shomokuroku. Kenshinryu Aikido is notable for its strong spirit and technique and the re-incorporation of genuine sword principles to the unarmed practice.

Present day Aikido has its origins in Daito Ryu Aikijujutsu as taught to the Founder, Morihei Ueshiba Sensei by Sokaku Takeda Sensei. Takeda claims the art was founded by Prince Teijun, the sixth son of the Emperor Seiwa (850 – 880AD). Through the princes’ son, Tsunemoto, it was passed onto succeeding generations of the Minamoto family. It is said the art reached Shinra Saburo Yoshimitsu, the younger brother of Yoshiie Minamoto, and that the foundations of present day Aikido had already been laid.

Yoshimitsu was apparently a man of exceptional skill and learning. Takeda claims his house, Daito Mansion, has given its’ name to his system – Daito Ryu Aikijujutsu. Yoshimitsus’ second son, Yoshikiyo, lived in Takeda in the province of Kai where he eventually became known by this name. Subsequently the techniques were passed on to successive generations as the secret art of the Takeda House and made known only to retainers and members of the family. In 1574 Takeda Kunitsugu moved to Aizu – the techniques continued to be passed on to his descendants only, and came to be known as the Aizu han otome waza (secret techniques of the Aizu clan). These claims remain unsubstantiated at this time. The only acknowledged link is from Takeda Sokaku to Ueshiba Morihei.

The Meiji Restoration brought not only the return of Imperial supremacy, but also a westernised cultural, political and economic influence. The Bushi (Samurai class) were virtually subsumed under the new constitution which declared all classes equal. Their exclusive combat arts, (previously referred to collectively as Bujutsu) became more oriented to moral and spiritual development and hence were from that time known as Budo. At that time, Sokaku Takeda began to teach the art outside the household, travelling widely through the recently unified Japan and finally settling in Hokkaido. 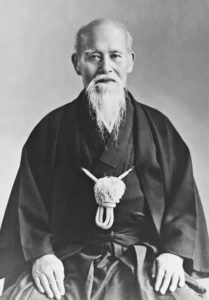 In 1915 Ueshiba met Takeda and commenced training in Daito Ryu Aikijujutsu. Ueshiba Morihei (14-12-1883) had a considerable interest in Budo. His father (Yoroku) was a prosperous farmer, local politician and of samurai descent. Prior to his training with Takeda he had focused on Yagyu Ryu Jujutsu, (said to have received menkyo kaiden – teaching license – in 1907), Yagyu Shinkage Ryu Sword, Hozoin Ryu spear and Tenjin Shinyo Ryu Jujutsu. The other major influence in the development of present day Aikido was Onisaburo Deguchi. Deguchi was the charismatic leader of the Omoto Kyo , a Shinto related group.

They met in 1919 when Ueshiba was on his way to see his dying father. In 1920 he built his first Dojo (training hall) in Ayabe and began teaching Omoto Kyo followers and sailors from the nearby naval base. In 1922 he began calling his art Aikibujutsu. By 1931 he was referring to the art as Aiki Budo and had opened his new dojo at Wakamatsu-Cho. By 1945 he had also constructed the dojo and farm at Iwama, a small farming town north of Tokyo. This is also the site of the Aiki Shrine, a national monument. Following the war, the name Aikido came into common usage. Ueshiba Sensei or O’Sensei (great teacher) refined his art further until his death in 1969.

During his life, many students trained with O’Sensei and several went on to emphasise certain elements of his art within their own schools. The main branches of modern Aikido are Aikikai (Ueshiba Kisshomaru), Yoshinkan (Shioda Gozo), Tomiki Ryu (Tomiki Kenji), Iwama Ryu (Morihiro Saito) and Shinshin Toitsu (Tohei Koichi).