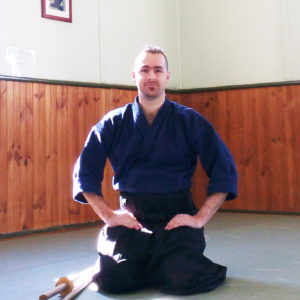 Aaron Williams began Aikido training in March 2001 through the “Young Warriors” high school program. Immediately after completing the course he began regular Aikido lessons at the Kenshinryu Palmwoods Hombu dojo and was a member of the first teen B.U.G.s group. At the same time he became a student of Shinto Muso Ryu, meeting and training with Nishioka Tsuneo Sensei at multiple Sunshine Coast and Brisbane Gasshuku. After participating in several Sei Ryu Kai Jodo Gasshuku held in Japan; Aaron received a Shodan grade in Shinto Muso Ryu from Nishioka Sensei in 2007, and then Nidan in May of 2008. In 2016 Aaron was made an official Kenshinryu Shinto Muso Ryu and Junior Aikido Instructor.